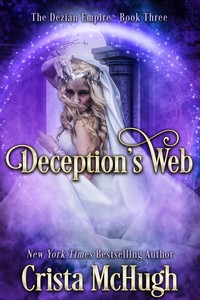 Galerius, former Captain of the Legion, is honored to be given a chance to redeem himself by discovering who is behind the failing barrier. A series of anonymous letters all point to Hostilius, governor of Lucrilia, but Galerius thinks he’ll learn more about the plot by seducing the governor’s thrice widowed daughter, Claudia. Although he warns himself not to fall into snare of the empire’s most deadly temptress, one kiss leaves him begging for more.

Claudia has spent years as a pawn in her father’s political games and longs to break free of his rule, even it means betraying him to the emperor. When Galerius arrives in Tivola, she’s not sure if he’s there to aid her father or stop him. She willingly submits to his seduction, despite their class differences, in order to find the truth. What she doesn’t expect to find is a man who indulges her secret fantasies, satisfying her in a way none of her previous husbands did, and treats her as something more than a conquest. As time runs out to thwart her father’s plans, she must decide if she can trust Galerius not only with her life, but her heart.