Where Nothing Ill Can Dwell 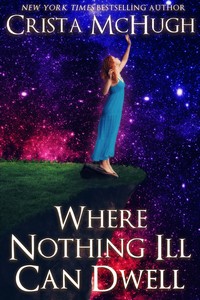 Where Nothing Ill Can Dwell

For most of her seventeen years, Miranda Prospero has lived with her mother on a wild, uncharted world on the fringes of the Bard Nebula, never knowing there were others like them in the star system. All that changes the moment a ship crashes onto her planet and introduces her to another of her species—a handsome, young man named Ferdinand.

But this is no accident.

Miranda’s mother has waited for the perfect moment to extract revenge against those who stripped her of power and exiled her to this remote planet. She orchestrated the system failure that caused the ships to fall from the sky.

Caught in the storm of her mother’s vengeance, Miranda’s conscience is torn. Now she must choose between the only family she’s ever known or risk everything for the boy who makes her heart race with each smile and stolen glance.

The boy who happens to be the son of her mother’s enemy.