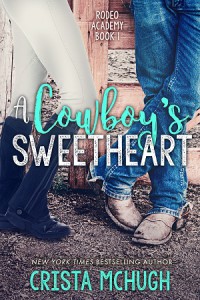 Pampered New York Socialite and dressage rider, Kensington Pope, has been exiled by her jet-setting parents to her aunt’s Rodeo Academy in Wyoming. She wants nothing to do with the rough and tumble students there, especially one particularly handsome cowboy, Javier. But she won’t be there for long. She has a plan in place to break out after her next international competition.

Javier Cruz takes one look at the spoiled city girl and instantly dismisses her. The school of tough knocks has already educated him on what the important things in life are, and he has bigger things on his plate.  He’s counting down the days until his eighteenth birthday when he can pull his younger siblings from the foster care program and reunite his family.  But as he gets to know Kensi, he sees a kindred spirit and discovers there’s more to her than meets the eye.

Kensi begins to question her desire to flee the ranch as her relationship to Javier deepens and she learns the importance of family. But when he discovers her escape plan, will he be able to trust her again? And when tragedy comes to the ranch, will Kensi be able to step up and take her place in the family?