Once in Coyote Moon 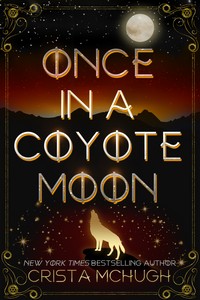 There’s no room for magic in the Age of Steam…

After winning the Civil War against the Confederate Wielders, the Union Machinists have outlawed magic to usher in a new age of steam-powered technology. Diah, an alchemist and the only non-wielder in his family, owes his brother for saving his life in the war; so when Cager is blackmailed into procuring the magical hide of the White Buffalo, Diah accompanies him to the Dakota territory.

Their guide is Oni, a half-Lakota woman with plenty of secrets to hide. She’s a magic wielder with an illegal wand concealed in her knife—and she’s a coyote shifter. To her people, killing the White Buffalo is not only sacrilege, it’s dangerous. Oni has no intention of helping them actually achieve their mission—until she falls in love with Diah…

Originally published as The Alchemy of Desire

From Wakela Runen’s World:
“Crista McHugh did an incredible job of drawing me into the world of magic, steampunk, and old west that she created.”

From I Smell Sheep:
“It is actually kind of sweet to see chivalry isn’t dead. This is my favorite aspect of the book. There is nothing wrong with this story. It is well-written and the premise of machinists vs. magic wielders was cool…” — Sharon S., 3/5 sheep